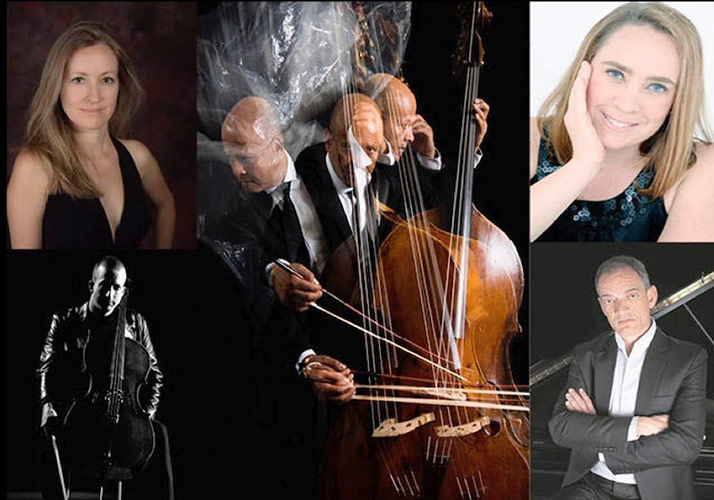 INSIDE THE CONCERT: UBUNTU ENSEMBLE

INSIDE THE CONCERT WITH ALBERT COMBRINK.
Each concert with the Cape Town Concert Series includes a small set of programme notes to allow you to enjoy the music in more depth.  Now that we are not able to bring you the concerts live – we have asked Albert Combrink to delve deeper into the music and composer to bring the music to you at home.  In addition to the programme notes, this month we have included more listening clips of music you might also like to explore.

Many critics wrote about performances of Mozart’s works during his lifetime. It seems there was a clear distinction in expectation between works to be dallied with at home, for popular entertainment with limited difficulty, and concert works entrusted only to the most gifted and diligent performers. Trailblazers such as Mozart and Beethoven occasionally found their unfettered creativity either falling between the two ideals, or not pleasing either. The first critics were quite scathing about Mozart’s Piano Quartets, mainly because they were usually played by musicians not quite up to the task.

Considered the first major piano quartet in the chamber music repertoire, the G Minor Quartet K.478 was the first of a set of three commissioned by the publisher Franz Hoffmeister. When Mozart presented the first of the three quartets in Vienna in 1785, Hoffmeister felt it was unsuitable for his predominantly amateur market, mainly because it was considered too difficult to play, and cancelled the commission of the remaining two quartets. Luckily for posterity the work was still published, and later Mozart wrote a second Piano Quartet.

In a sense, these works could be described as Piano Sonatas with added colours from other instruments. The piano leads the way when introducing new ideas, themes or modulations, and the other instruments respond rather than initiate conversation points. In many of Mozart’s works, G Minor is reserved for music of grief and sadness, but this work spends much of its time in the relative key of B Flat Major, often used for Mozart’s more exuberant music like the 15th Piano Concerto K. 450.

The opening of the first movement makes a bold announcement in the Minor key, setting up expectations of a dark drama. Even when the middle section tries to re-assert the dominance of the minor key, the mood is decidedly upbeat and positive. Even some of the figurations in the piano in thirds, are reminiscent of the light-hearted B Flat Major Piano Concerto but avoids the intense drama of the D Minor found in the Piano Concerto No.20 K. 466 premiered in the same year as this Quartet.

Domestic charm and bliss characterises the second movement, a lyrical Andante in B Flat Major. An unhurried quality pervades, and the subtle interweaving of string-lines keeps the movement afloat, never sinking into lethargy or boredom.

Following the restraint of the Andante, the piano comes bounding out, like an excited child leading the other children out of the formal dining room for some outside playtime. The joyful G Major is in a conventional Rondo, a musical form where the opening material recurs regularly as a refrain, interspersed with the odd memory of the darker material from the first movement.

At the time the piece was written, the harpsichord was still widely used. Although the piece was originally published with the title of Quartet for harpsichord or forte piano, violin, viola and cello. Stylistic evidence suggests Mozart intended the piano part for “the ‘Viennese’ fortepiano of the period” and that, according to Basil Smallman, our modern piano is “a perfectly acceptable alternative.” [Basil Smallman, The Piano Quartet and Quintet: Style, Structure, and Scoring, 1994, Clarendon Press, p. 11]

Matthijs Van Dijk: But All I Wanna Do is Dance

Cape Town based composer Matthijs wrote the following about his work in 2016, but it can certainly translate into our current lockdown immersion into social media.

I started writing “But All I Wanna Do Is Dance” in 2016, pretty much the moment I got an email from Leon Bosch asking me if I either had something for “Trout Quintet” sized ensemble (violin, viola, cello, double bass and piano) or if I were interested in writing something for that instrumentation for this concert.

The piece is 21 minutes long, and although it is one continuous movement, it can be broken up into 3 larger sections, with a few motifs being passed from one section to the next and developed along the way.

As to what inspired it and what it’s about, whilst not my intention when I began writing it, the more I worked on it, the more it became a “time capsule” of sort of the year 2016 was turning out to be! – to quote a t-shirt I saw recently “2016 Sucked” – as well as a reaction to social media fatigue, something I think many of us are coming to grips with. From Brexit and Trump, to students (and friends) clashing with police over free education in South Africa, we’ve been confronted, through the help of Facebook and Twitter, with what seems to be a never ending wave of anger, frustration, hate and bigotry in all shapes and sizes – all issues that need to be addressed, and, once one is aware of them, unable to ignore. (Without even mentioning the general air of “That person’s life is better than mine.” that social media seems to encourage…) The title is not a joyous declaration by any means, but rather an “inner childlike” plea – an overwhelmed whisper of “I can’t be an adult anymore. Please stop.” Originally, I was going to call it “#butallIwannadoisdance”, but I felt that instead of allowing social media to overpower me, I needed to break free from it and drop the hashtag.

While I wouldn’t say the piece is programmatic as such, there is a very loose narrative. The first “movement” is based on contemporary electronic dance music gestures and represents childhood/student days, thinking back to a carefree time when one was too young to really know what was going on in the world, if one was fortunate (or privileged) enough to not have to. However, instead of letting it develop into the traditional “drop”, it abruptly cuts to the second section – present day – a sketch of someone fixated on a screen, with pages and pages of information washing over them, with a sense of helplessness, not really knowing where to begin with how to process it all or what to do about it. The last section is an elegy to one’s inner child – the above mentioned plea – again incorporating EDM gestures.

What is interesting for me is that while I’ve been using rock/metal and dance music in my pieces for a few years now, where as some of those works “celebrate” the hedonistic element of nightclubs (or the notion of “Dance like nobody is watching you.”) the climax of this work, for me, feels like The Nightclub where all those other pieces take place has imploded. (Also worth mentioning, while I was working on this section, the results of the American election came in, squashing whatever hope of sanity prevailing was left…) People that know my music know that I don’t shy away from dark subject matters, however it’s very rare that I write something that is completely without hope, and this comes very very close to that. I do however end the piece with the tiniest flicker of hope (with the use of a major third between the viola and piano) but intentionally ambiguous. I am generally optimistic but I think there is a current global feeling of “Okay… So what now?” and I’ve tried to reflect that in the piece.

LISTEN TO THE WORK HERE: https://www.youtube.com/watch?v=si6InIy_tqY

It is extraordinary to imagine that Schubert was only 22 when this remarkable work was written. In quoting one of his own, as yet unpublished songs, Die Forelle (The Trout) written in 1817, setting it as the ground material for an unusual grouping of instruments, Schubert combined so many aspects of his greatness in one moment: the consummate master of the German Songmaker, a subtle orchestrator, a phenomenally gifted and agile pianist, the master of the ‘Theme-and-Variations’, and a stylistic innovator.

The young Schubert had a great advocate for his music in Johann Michael Vogl, a baritone at the Vienna Court Opera. Through Vogl, Schubert was invited to the home of wealthy music lover Sylvester Paumgartner who used to stage midday concerts in his salon. He commissioned Schubert to write a Piano Quintet for one of his house-concerts, but requested the instrumentation to include the Double Bass rather than the second violin of the traditional String Quartet instrumentation. Paumgartner had heard a performance earlier of Johann Nepomuk Hummel’s Piano Quintet with Double Bass Op.87 and Schubert’s work might even have been planned to be on the same programme at a future date.  Schubert extends the usual 4 movement Sonata form by including a set of variations before the finale, creating a most engaging and unique architecture. While the Quintet was only published after Schubert’s death, the famous song Die Forelle was so popular that it was published several times during Schubert’s life, the first time in 1820, one year after this Quintet was written. Schubert not only integrated this song into all movements, but in the fourth movement, he creates a theme and variations of it.

A fisherman in the stream is struggling in vain to catch a Trout, which darts and dives through the shimmering ripples.  The fish is absolute embodiment of energy, life, and of course, creative spirit, and outwits the fisherman at every attempt, leaving him frustrated and angry while the happy little Trout flicks away yet again. In the song, of course, the poor Trout ends up as someone’s supper, but the song never explores the tragedy, and neither does the Quintet. An eternal optimism and life permeates the work, no doubt contributing to its popularity

A rippling triplet figure introduces the work, giving it a feeling of boundless energy and motion. It extremely virtuosic without attempting to create bravado about the difficulty. Sudden but unjarring harmonic shifts appear almost immediately revealing Schubert as the Romantic innovator that he was. Melodies tumble over one another but never disturbing the scuttling energy of the Trout in the River Rhine.

The second movement is a pastoral nature piece, as if the fisherman was perhaps sitting next to the river waiting for the fish to bite, and looks up and takes in the exquisite natural surroundings. It is in two symmetrical sections, and as is typical with Schubert, some subtly disguised harmonic shenanigans are employed to let the movement end in the key that it began, creating a sense of comfort and familiarity in the listener.

The third movement reveals some of Schubert’s familiarity with string ensemble works, explored further in his 15 String Quartets. Playful interactions between piano on the one hand, and strings which function as a unit, on the other, gives this a particularly ‘Mendelssohn-ian’ feel.

The fourth movement introduces the theme of  Die Forelle formally and sets out a sequence of variations, which avoid “development” in the style of Beethoven for example, and instead focusses on melodic decorations and changes of mood. In the first four variations, the theme is played each time by a different grouping of the instruments, while the 5th variation starts the harmonic journey back to the opening key, so that the end of the movement lands very satisfactorily on the home key.

The fifth movement is again in two symmetrical sections. While less chromatic than the other movements, it remains harmonically clever and inventive. The signature piano sound of this work is really heard here – high-lying fast-flowing figuration avoiding the large heavy chords Romanticism was beginning to explore in earnest.

A light and bright work, but anything but lightweight, the work has remained one of Schubert’s most loved compositions.

LISTEN TO THE WORK HERE: https://www.youtube.com/watch?v=MrnBoH1Aq0g