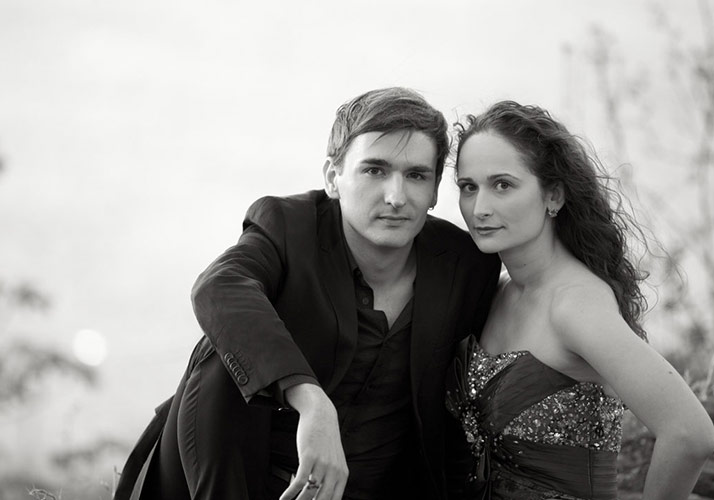 INSIDE THE CONCERT – LAVROVA PRIMAKOV DUO

INSIDE THE CONCERT: Each concert with the Cape Town Concert Series includes a small set of programme notes to allow you to enjoy the music in more depth.  Now that we are not able to bring you the concerts live – we have asked Albert Combrink to delve deeper into the music and composer to bring the music to you at home.

To imagine life in the Mozart household is an interesting exercise. Father Leopoldt resisted being pushed towards the priesthood by his family, to become instead a violinist, conductor, organist and one of the foremost music teachers in Salzburg. He started teaching his 7-year-old daughter Nannerl the keyboard, and immediately the 2-year-old Wolfgang interfered in the lessons, correcting from underneath the piano and singing correct versions of his sister’s wrong notes until Leopold had no choice but to include the toddler in the lessons. Pretty soon the boy was surpassing his older sister and when Mozart reached age 5, he made his concert debut with her. Leopold wrote in astonishment about the “miracle which God let be born in Salzburg”. Concert tours followed and the fairytale of the child prodigy was born.

Given that so much of his formative performing experience was at the piano with his sister, it is therefore surprising that Wolfgang wrote only one grand sonata for two keyboards. And grand it certainly is. As to be expected of a Mozart work in D Major, it is a happy composition, virtuosic, light and brilliant. Not to say that it is lacking in substance, but nowhere do the clouds descend that one would hear in all his D Minor works for example. Perhaps a clue to the carefree mood of the work lies in the fact that Mozart wrote it in 1781 for a pupil of his, a young Fräulein Josephine von Aurnhammer. The 25-year old Mozart had fallen in love and was having great fun teaching her and enjoyed giving the odd concert with her, including the Concerto in E Flat for 2 Pianos K.365 which he had written earlier for performance with his sister and ensemble.

Luckily for the world of opera, his love-affair was short-lived, leaving the path clear for his entanglements with the Weber sisters, especially his future wife Costanze, who inspired not only his heart, but also his greatest operatic masterpieces.

The opening Allegro con Spirito (brisk and lively) stays true to its title, launching with a thrilling, trilling fanfare straight into quick and bubbly material which flirts with the formalities of Sonata form and even threatens to break into a fugue, but rejects these in more lighthearted pursuits of two-piano textures, imitation patterns and playful passing of material to-and-fro between the players.

A deceptively simple Andante (moderate pace) follows a three part ‘ABA’ form and would not be out of place as a lighthearted aria or duet in one of the operas. The melody is highly adorned, but despite the Rococo (elaborate) decoration, the quiet delicacy of the movement is never disturbed and the very economy of notes is a challenge to the performers’ tonal resourcefulness.

The third movement leaps into action with a lively theme full of dash and verve, the repeats of which perfectly bind together this energetic rondo. Elements of humour and playfulness include a section of gypsy-like flavour in a Turkish style calling to mind the famous “Rondo alla Turca”.

This sonata was used in a scientific study which tested the theory of the “Mozart Effect” which suggested that classical music increases brain activity more positively than other types of music. One can only imagine what Wolfgang would have had to say on the matter.

Here we can hear piano duo Lucas & Arthur Jussen who visited Cape Town for the CTPO Symphony season in 2019.  This is taken from a live recording on 25 June 2019, Konzerthaus Dortmund.

Camille Saint-Saëns is a central figure to French Romantic composition, but he was also one of the greatest keyboard prodigies of the past 200 years. He made his recital debut at age ten at the Salle Pleyel, Paris, in a programme that included the option of an encore choice by the audience of any of Beethoven’s 32 Piano Sonatas from memory. Liszt referred to him as the greatest organist on earth and it is there no surprise that he left behind a huge repertoire for both piano and organ.

One of the surprising contradictions of Saint-Saëns the composer, is his great desire to explore new sound-worlds, whilst remaining relatively conservative in formal structures. Sonatas and sets of variations seem happy to cover the well-trodden path of his predecessors, leaving more dramatic formal experiments to Liszt and Berlioz.

The set of variations was written in 1874 and is based on the upbeat Trio from movement III, Menuetto, of Ludwig van Beethoven’s Piano Sonata No. 18, Op. 31 No. 3 (1802) (Beethoven had himself written another set of variations on the theme of the finale of the same work). It was one of the last works Saint-Saëns wrote before his unhappy marriage to Marie Truffot and a certain carefree spirit inhabits the light-hearted work in which each of the variations is clearly separated.

An original introduction leads to a version of Beethoven’s theme. The ten following variations are occasionally interspersed with versions of this introduction or a simpler version of the theme. It is a highly conventional set of variations, but the inventiveness of the pianistic treatment makes this a delightful 20 minute excursion.

Greg Anderson (1981). Carmen Fantasy for two pianos (based on themes by Georges Bizet)

When Georges Bizet premiered his opera Carmen, it was a total flop. Audiences were outraged at seeing actual murder, infidelity and promiscuous behaviour directly portrayed on stage at the Paris Opera. Bizet died shortly after – depressed and feeling that he had failed as a composer. Little did he know that within a few decades Carmen would become one of the most loved operas in the entire repertoire. The story has it all – love, passion, betrayal, eroticism and a collection of hit-tunes which has made it one of works most mined for Fantasies, Variations and orchestral suites, and quasi concertos for every instrument imaginable.

One of the most inventive recent rethinks of the grand romantic fantasy was done by American pianist, composer, video-producer and writer Greg Anderson who is one half of the famous “Anderson & Roe Piano Duo.” Anderson teamed up with Elizabeth Roe when they studied at Juilliard together. He writes and arranges most of their performance material since they have pretty much exhausted the mainstream two piano repertoire.

“A concert fantasy in the grand romantic tradition, the Carmen Fantasy for Two Pianos weaves together several distinct scenes from Georges Bizet’s beloved opera Carmen. Serving as an introduction, the work begins with the Danse Bohémienne from Act IV, a ballet that is almost always cut from modern performances of the opera. (Incidentally, Bizet used the same material as incidental music to his L’Arlésienne.) The introduction is followed by the Aragonaise – originally the entr’acte to Act IV, a scene just before the opera’s climactic bullfight, the famous Habanerafrom Act I in which Carmen sings the famous aria “L’amour est un oiseau rebelle,” (Love is a rebellious bird), and the Card Aria from Act III in which Carmen reads in the cards that both she and Don José are doomed to die.  Following the terrifying omen of death, the music cuts to the Flower Song from Act II, a scene that epitomizes the love Don José and Carmen once shared for one another. Ultimately, the juxtaposition serves to highlight the tragedy of the opera without actually recreating the opera’s climactic recitative in which Don José murders his former lover, Carmen. The fantasy concludes with a party scene from the beginning of Act II, in which Carmen and her friends entertain army officer with a song about gypsy girls (much like themselves). The music accelerates in a whirlwind of fevered rhythm, Basque tambourins, and ecstatic dance.”

Here we have Anderson & Roe, featured on their album “When Words Fade”

The turn of the 19th-20th centuries in Russian history is characterized by outstanding achievements, discoveries, economic modernization, strong personalities and talents on the one hand, and on the other, by social disasters, revolutions and wars. This time was called the Silver Age. Rachmaninoff and Tchaikovsky are prime examples of this era, despite spanning different sides of the 1900 timeline.

“Suicide theories were much stimulated by the Sixth Symphony, which was first performed under the composer’s baton only nine days before his demise, with its lugubrious finale -ending morendo, (dying away), its brief but conspicuous allusion to the Orthodox requiem liturgy in the first movement and above all its easily misread Pathétiquesubtitle. When the symphony was done again a couple of weeks later, in memoriam and with subtitle in place, everyone listened hard for portents, and that is how the symphony became a transparent suicide note.

Depression was the first diagnosis. ‘Homosexual tragedy’ came later.” [Taruskin, Richard (1 July 2000). “The Essential Tchaikovsky”. Russian Life] The Symphony No. 6 in B minor, Op.74, also known as the Pathétique Symphony, is Tchaikovsky’s final completed symphony, written between February and August 1893. The composer entitled the work “The Passionate Symphony”, employing a Russian word, Патетическая (Pateticheskaya), meaning “passionate” or “emotional”, which was then (mis-)translated into French as pathétique, meaning “solemn” or “emotive”.

The composer led the first performance in Saint Petersburg on 28 October of that year, only nine days before his death. The second performance, conducted by Eduard Nápravník, took place 21 days later, at a memorial concert on 18 November. It included some minor corrections that Tchaikovsky had made after the premiere, and was thus the first performance of the work in the exact form in which it is known today.

The symphony is in four movements:

The first movement, in Sonata Form, frequently alternates speed, mood, and key, with the main key being B minor. It moves from a quiet opening through the most famous orchestral melody and explores nightmarish material before returning to the song of mourning.

The second movement, a dance movement in ABA Ternary Form, is in an unusual 5/4 time which has been described as a “limping” waltz. The opening contrasts with the darker B section where the timpani sounds on every beat. A graceful coda leads to a quiet ending.

The third movement begins with a fast, exciting motive playing fast runs of semiquavers against a different meter. The movement ends triumphantly, giving the feeling of a deceptive finale, often confusing audiences in performance who might think the work has ended. It is clearly inspired by the finale of the Symphony No.3 “In the Forest” by Joachim Raff, which was very popular at the time.

Back in B minor, the finale is a slow movement in ABA (ternary) form. Beginning instantly the opening “A” theme, melody on the first and second violins appears frequently through the movement. The theme is a “composite melody”; neither the first nor second violins actually play the theme that is heard.

Sadly we missed having Natalia and Vassily perform this piece but at least we can hear them from their album available on their own record label – LP Classics.

You can find more performances by the duo on You Tube and via their website: http://lpclassics.net which features, in addition to their own playing, a number of wonderful artists and rarely performed works.