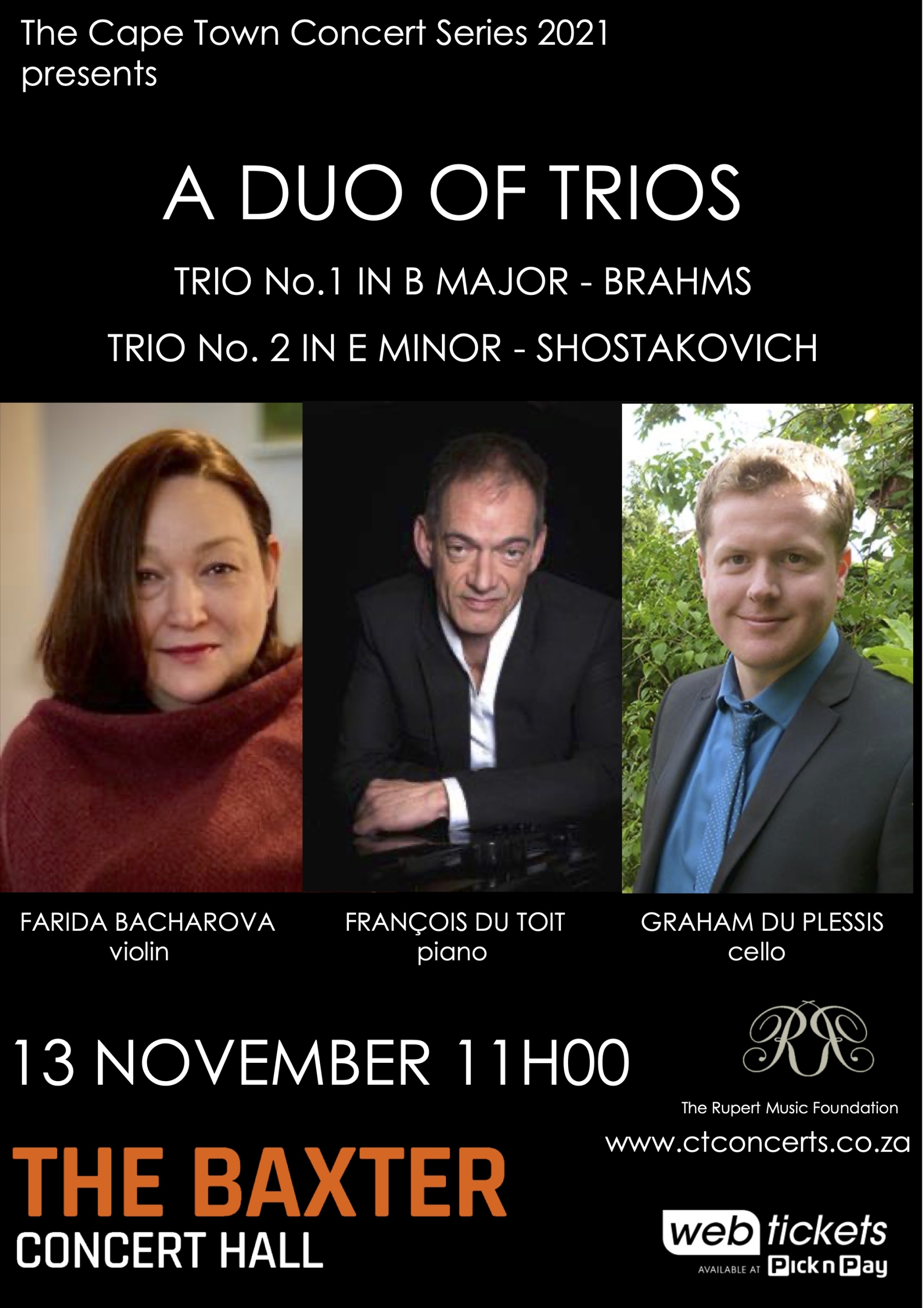 CTCS Presents a Duo of Trios

Violinist Farida Bacharova, pianist François du Toit and cellist Graham du Plessis will perform the Brahms Trio No. 1 in B major – written when he was just 20 years old; followed by Trio No 2 in E minor by Shostakovich composed during more sombre times of World War Two.

The concert lasts for just over an hour and there will be a short in-conversation with the musicians directly after the concert in the hall where they will discuss the choice of works in more detail and answer questions from the audience.

Tickets from Webtickets. The Baxter restaurant and bar are open in the well ventilated Baxter foyer. All Covid rules apply and masks are to be worn in the concert hall.

About the Artists:
Pedagogical College, Farida Bacharova enjoys an active career as a soloist, chamber musician, orchestral leader and pedagogue.

As concertmaster of the USSR State Maly Symphony Orchestra and a member of the Moscow Philharmonic Orchestra, Farida performed as a leader and orchestral soloist in many of the world’s major halls and has performed under some of the most distinguished conductors of our time including Zubin Mehta, Yehudi Menuhin, Seiji Ozawa, and Lorin Maazel. Farida joined the Cape Town Symphony Orchestra after relocating to South Africa in 1995 and is currently guest concertmaster of the Cape Town Philharmonic Orchestra.

Farida has appeared as a soloist with the Cape Town Philharmonic Orchestra, Kwa-Zulu Natal Philharmonic and Free State Symphony orchestra, to critical acclaim. As a recitalist and chamber musician she has performed in the Rachmaninov Hall, White Hall and Chamber Halls of the Moscow Conservatory, at the Conservatoire National Supérieur de Musique et de Dance de Paris and regularly throughout South Arica in collaboration with renowned local and international artists.

A strong advocate for new music, Farida has premiered many contemporary compositions and works closely with South African composers. She is a regular faculty member and performer at festivals such as the Stellenbosch International Chamber Music Festival, National Arts Festival and Gauteng Chamber Music Festival.

Acknowledged as one of South Africa’s leading concert pianists and musicians, François Du Toit is an Associate Professor of Piano and Head of Practical Studies at the University of Cape Town.  Receiving his early musical training from Merryl Preston, he went on to complete an Honours degree at the University of Cape Town, studying under the distinguished pianist and teacher, Laura Searle. Also holding diplomas up to Fellowship level from the Trinity College of Music, London, he studied for the Solistendiplom at the Hochschule für Musik und Theater in Hannover, Germany, under the renowned pedagogues Arie Vardi and Bernd Goetzke.

During his period of study abroad he distinguished himself in several important international piano competitions, taking top prizes in the 1991 Hannover Music Competition, the 1992 Rotterdam and 1993 Marsala Internationals, and the 1994 International Maria Callas Competition in Athens.

Appearing as an acclaimed soloist with orchestras (both locally and abroad) since the age of fifteen, François du Toit was selected, while still a student at UCT, to accompany the former Cape Town Symphony Orchestra as soloist on its historic tour of the Republic of China (Taiwan) in 1988. He has over 40 concertos in his repertoire, ranging from Bach to Scharwenka and has also performed the concerto premieres of South African composers, Hendrik Hofmeyr and Adrian More. He has performed with conductors including Bernhard Gueller, Victor Yampolsky, Omri Hadari, Alun Francis, Thomas Sanderling, Dawid de Villiers, Piero Gambo, Arjan Tien and Alexander Lazarev.  Together with Anmari van der Westhuizen and Farida Bacharova he formed the UCT Piano Trio and also appears with Franklin Larey as the Ixopo Piano Duo.  He is constantly in demand as accompanist for visiting artists such as Wolfgang David, Philippe Quint, Antje Weithaus, Ilya Gringolts and Julian Lloyd-Webber, to name but a few. In July 2006 he released his first solo CD comprising works of Bach-Busoni, Haydn, Mendelssohn and Chopin and in 2010 TwoPianists record label released his recording of the Tchaikovsky 1st Piano Concerto and the Rachmaninoff Paganini Variations with the Cape Town Symphony Orchestra.  He has given recitals and master classes in America, Asia and Europe and in 2012 he undertook a concert tour to Paris, Vienna and Cardiff where he accompanied the flautist, Liesl Stolz in a programme of South African flute music which was later recorded on CD under the SACM label. In 2014, he gave the premiere of the Adrian More piano concerto with the Cape Philharmonic Orchestra.

In between lecturing and administrative duties at the University of Cape Town where he is Head of Practical Studies, François is external examiner for several universities in South Africa and is often invited to sit as juror for competitions throughout the country and abroad.  To celebrate turning 50, he performed all five Beethoven piano concertos with the Cape Philharmonic Orchestra at their Summer Festival on the 24th and 25th of February 2016 under the baton of Victor Yampolsky. In October 2016, he repeated these performances with the Gauteng Philharmonic Orchestra in Pretoria. In 2017 he received the Creative Works Award from the University of Cape Town. This is the first time this award has been given to a member of the South African College of Music. In the same year, François was also presented with the Molteno Medal for his contribution to Music.

Graham du Plessis completed his Bachelor of Music (Hons) at the University of Birmingham. He then went on to study at the Royal Welsh College of Music and Drama, where he completed his MMus specialising in cello performance. He was the recipient of the Eifion Evans award for musical excellence and the winner of the Cardiff Violins chamber music competition. As a teenager he was also a runner-up in the BBC Proms Young Composer competition.

After his studies Graham enjoyed performing chamber music throughout Europe, giving recitals in the UK, Switzerland, Sweden, and in Ischia as a guest of Lady Walton (the late wife of the composer William Walton). He also worked with a variety of British orchestras including the Royal Liverpool Philharmonic Orchestra, the Bournemouth Symphony Orchestra, the BBC National Orchestra of Wales and various other symphony orchestras and chamber ensembles.

Graham has also appeared as a cellist in several mainstream films, recorded film and TV music for the likes of Universal, and he has performed and recorded music with a number of contemporary artists from a range of genres.

Since returning to South Africa in 2017, following many years overseas, Graham has enjoyed freelance work as a performer. He also teaches at the University of Cape Town.

In his free time Graham enjoys the stillness of the Karoo, the wildlife of Kruger, and hiking in various South African mountain ranges.