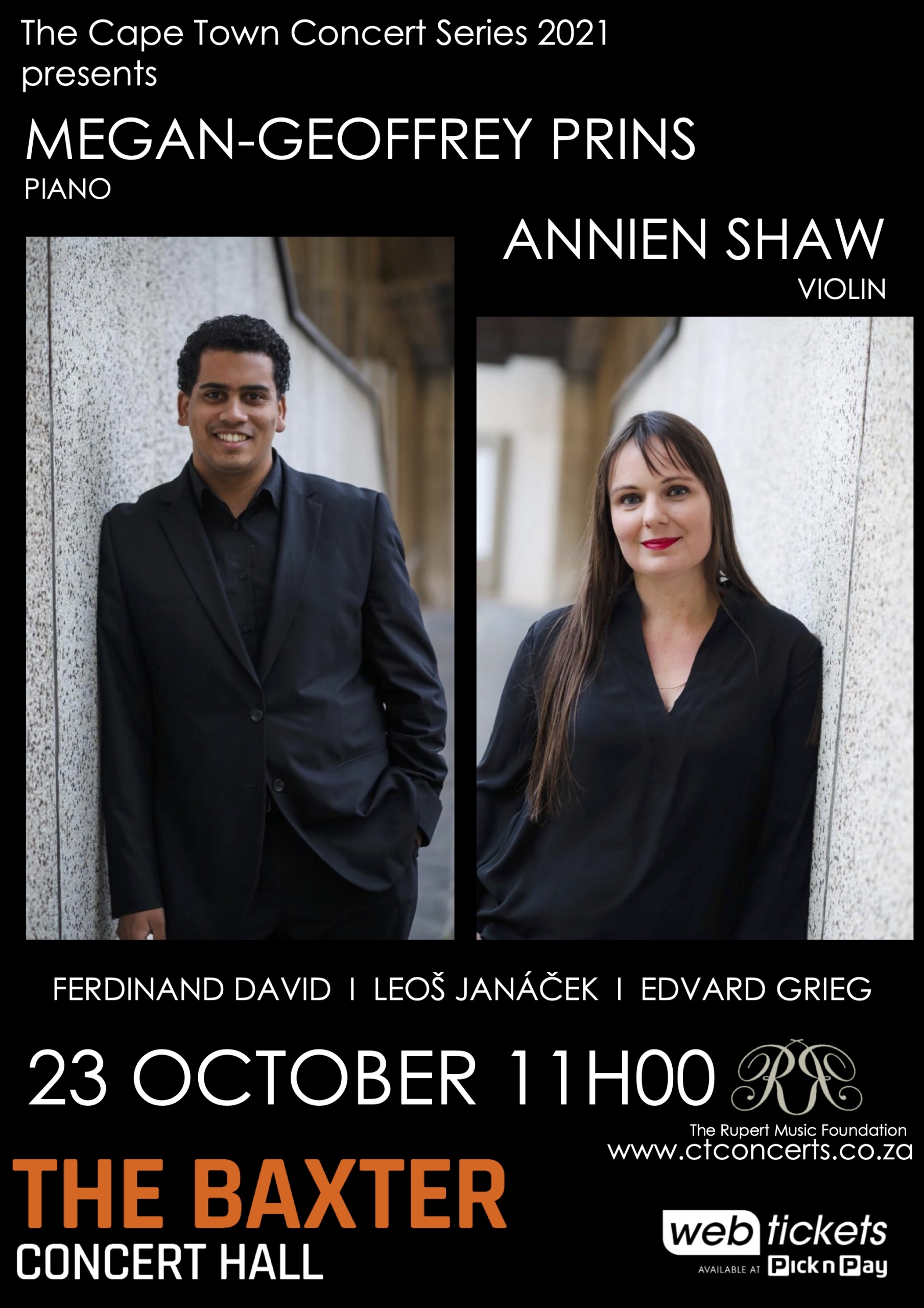 The Cape Town Concert Series returns to the Baxter Concert Hall on Saturday 23 October for a morning of duos for violin and piano with Annien Shaw and Megan-Geoffrey Prins.

The concerts last around one hour without interval and there will be a short in-conversation with the artists after the concert in the hall, where they will talk about the music and answer questions from the audience.

Tickets from Webtickets or email info@ctconcerts.co.za

Dr Annien Shaw is a soloist, chamber musician, baroque violinist and teacher based in Cape Town, having studied with Louis van der Watt, Suzanne Martens, Jan Repko and Farida Bacharova. She holds a PhD in Performance Practice from the University of Cape Town, a PGDip and FRSM in solo performance from the Royal Northern College of Music in Manchester UK, and a Masters in Chamber Music from the University of Stellenbosch. Annien has extensive orchestral experience through her former employment with the Jeunesses Musicales World Orchestra, KZN Philharmonic as well as the Cape Town Philharmonic orchestra. As a chamber musician she led the award-winning Stellenbosch University String Quartet on two international tours as well as being a founding member of the renowned Juliet String Quartet. She has been actively involved in the developing Baroque scene in Cape Town as a member of the Cape Consort and a Guest Concert Master and soloist of the Camerata Tinta Barocca (CTB). Annien is the founding member of The Flat Mountain Project and lectures in repertoire studies, teaching methodology, chamber music, orchestral studies, violin and viola as subjects.

Prins currently serves as full-time piano lecturer on the faculty of the University of Pretoria: School of the Arts. He completed his postgraduate studies with Antonio Pompa-Baldi at the Cleveland Institute of Music where he was awarded the Sadie Zellen Piano Prize, the Arthur Loesser Memorial Prize, and the Maurice and Judith Kaplow Prize for Uncommon Creativity. He received a Bachelor of Music degree from the University of Stellenbosch in South Africa. Local achievements include first prizes at the UNISA 120th Anniversary Competition, the inaugural Stellenbosch International Chamber Music Festival Competition, the 5th UNISA National Piano Competition, the 2016 Muziq Instrumental Competition, and the 2017 SAMRO Overseas Scholarships Competition.