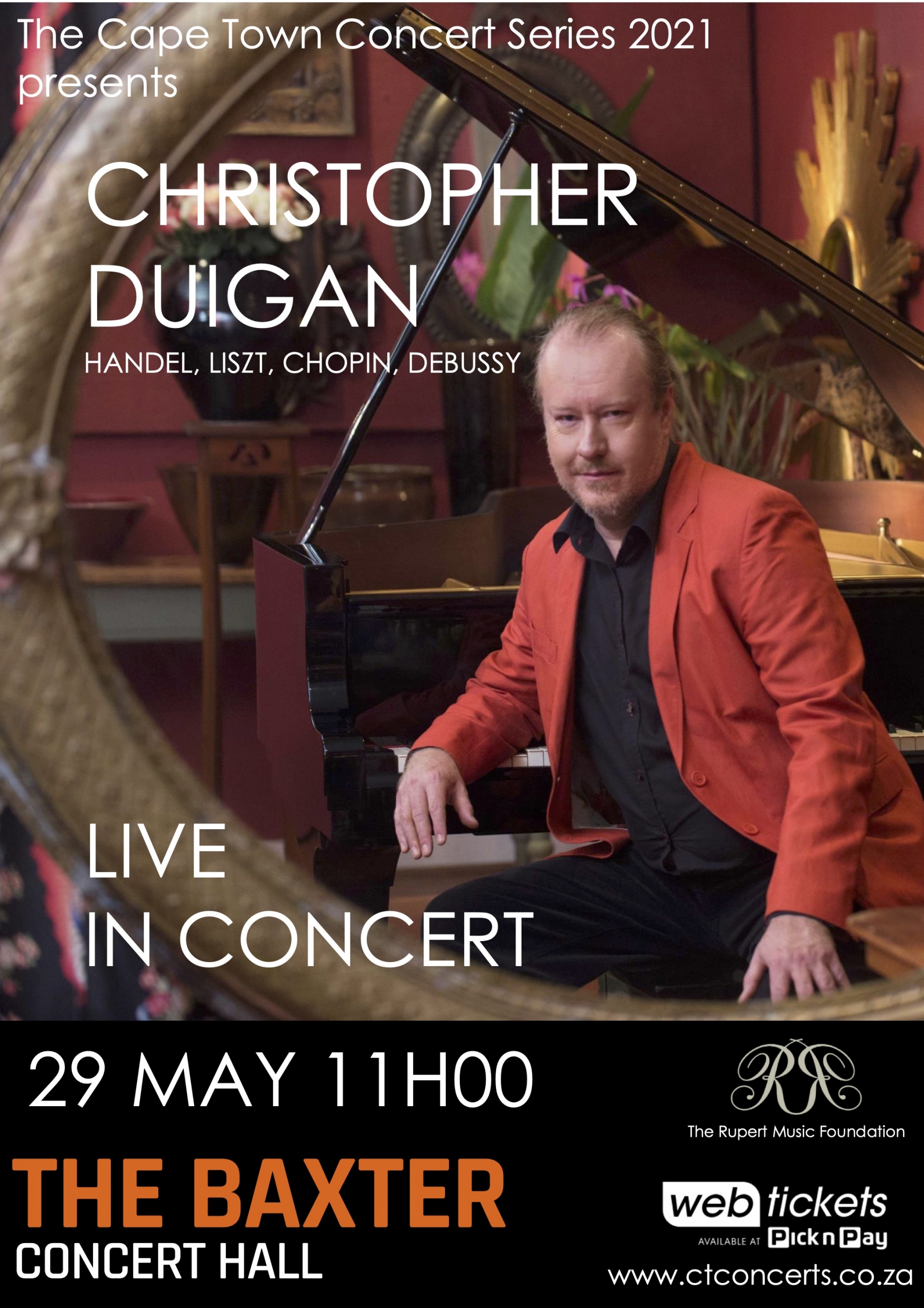 The Cape Town Concert Series Live celebrates musicians who have kept the music playing on during lockdown. This May we present pianist Christopher Duigan who has broadcast more than 100 online concerts in the past year.
The programme of works by Handel, Liszt, Debussy and Chopin will be around 70 minutes without interval, and we will hold a short in-conversation with Christopher after the concert in the hall where he will talk about his music making and online experience.
Saturday 29 May, 11am
Baxter Concert Hall.
Tickets from Webtickets
Programme:
GF Handel – Chaconne in G HWV 435
Ludwig van Beethoven – Sonata in B-flat, Op. 22 – 1st movt: Allegro
Frédéric Chopin – Ballade No. 1 in G minor, Op. 23
Franz Liszt – Transcendental Étude – No. 11: ‘Harmonies du Soir’
Claude Debussy – ‘Reflet dans l’eau’ from Images I
Sergei Rachmaninoff – Études-Tableaux Op. 33 No. 2, Op. 39 No. 1

Widely regarded as one of South Africa’s leading and most innovative concert pianists, CHRISTOPHER DUIGAN has been recognized as a ‘South African piano icon’ and ‘national musical treasure’ (Classic Feel June 2009). He has performed extensively with all leading South African orchestras in a repertoire of more than 25 works for piano and orchestra. In recital he has developed a popular following through his innovative presentation and programming of a broad and eclectic taste in music. Recent highlights include more than 20 performances of an all-Chopin programme following a visit to Warsaw, Poland in 2015.

Major recital engagements include those at the Brooklyn Theatre in Pretoria, Casa Labia in Cape Town,  Steinway Hall in London, in Mexico City and at the National Arts Festival (Grahamstown) and Hilton Arts Festival.

Christopher Duigan has developed large following in South Africa through the broadcast of his recordings which are frequently aired on ClassicFM (Johannesburg)  and Fine Music Radio (Cape Town).

In 2010 he became one of only six pianists in South African history to be invited to be a ‘Steinway Artist’, joining an exclusive company of renowned international musicians.

Based in the KwaZulu-Natal Midlands he is committed to promoting concert performance, both his own and those of others, locally and further afield. As producer and impresario he is the director of the widely acclaimed MUSIC REVIVAL which he established in 1997. Major projects now include more than 100 concerts annually,  including the Marriott Classic Music Festival  in Franschhoek and a series of performances by the KwaZulu-Natal Philharmonic Orchestra in KZN.

Christopher Duigan began piano studies with Anette Kerkovius in Pietermaritzburg at the age of seven. He continued his  studies at the University of Natal with Italian concert pianist Isabella Stengel from age 14, graduating with a B.Mus (cum laude).  Christopher furthered his studies at the University of Cape Town with Lamar Crowson and Albie van Schalkwyk, graduating with an M Mus (Performance) in 1994, and later at the Royal Northern College of Music (RNCM) in Manchester with Brazilian virtuoso Arnaldo Cohen. At the RNCM he was awarded the Professional Performer’s Diploma (PPRNCM) and won first prize in the prestigious RNCM Recital Prize for Pianists. In addition he received the UNISA Overseas Scholarship Competition (1994), Crossly/Kramer Scholarships for International Study from UCT, 1st prize and Gold Medal in the Adolph Hallis Piano Competition (1996), awards for the best South African pianist in the UNISA International Piano Competition (1996), Gold Medal in the Pan-African Concours de Musique,  and the Cape Town Symphony’s prestigious Joseph Lan Award for his performance of the Bartok Piano Concerto No 3 (1994). He has participated in master classes at Dartington Summer School with Stephen Kovacevich and at the Mozarteum, Salzburg.

In recent years he has established a highly successful and productive collaboration with Spanish virtuoso saxophonist David Salleras that has resulted in two  albums recordings of his own original music: INDIGO (2015) and MIDNIGHT BLUE (2016).   Numerous national tours of South Africa followed and a tour of six concerts with GIO Orchestra in Spain took place in April 2016 and again March 2017.  These featured Duigan‘s own music from the albums conceived for solo saxophone and piano with the orchestra. In December 2018 Salleras and Duigan were soloists with the Orquestra des Valles at the Palau de la Musica, Barcelona, one of the world’s most prestigious concert venues.

Christopher Duigan is a Steinway Artist.