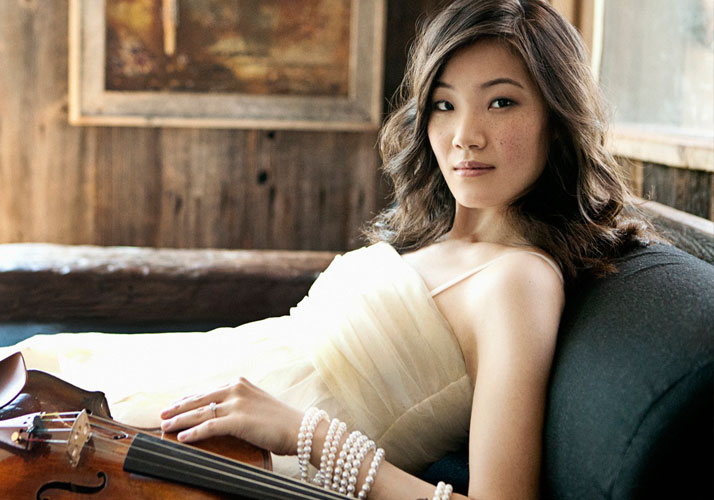 Violinist RACHEL LEE PRIDAY (PRY-day), acclaimed for her beauty of tone, riveting stage presence, and “irresistible panache” (Chicago Tribune), has appeared as soloist with major international orchestras, including the Chicago, St. Louis, Houston, Seattle, and National Symphony Orchestras, the Boston Pops, and the Berlin Staatskapelle. Critics have praised her “dazzling, forceful technique,” “rich, mellifluous sound,” and “silvery fluidity.” Combining a fierce intelligence with an imaginative curiosity, her wide-ranging repertoire and eclectic programming reflect a deep fascination with literary and cultural narratives, as an artist who seeks contemporary resonances with the masterworks of the past.  She will be performing in recital with American pianist Bryan Wallick.

Rachel’s frequent recital appearances have brought her to such distinguished venues as the Mostly Mozart Festival at Avery Fisher Hall, the Kansas City Harriman-Jewell Series, Ravinia’s “Rising Stars” Series, and UCSB Arts and Lectures. Recent highlights include a debut UK recital tour, recitals at the Sarasota Opera House, Lawrence University, the Dame Myra Hess Memorial Series in Chicago, shows at Joe’s Pub and SubCulture in NYC, and an 8-recital tour of South Africa with pianist Bryan Wallick. As a chamber musician, she has been invited to participate as a guest artist at the Los Angeles Chamber Orchestra’s “Chamber Music Marathon” and the Moritzburg Festival in Germany.

Rachel made her European concerto debut in October 2006, performing the Sibelius Concerto with the Berlin Staatskapelle and Maestro Mikko Franck to an overwhelming response. In Europe and in Asia, engagements have further included recitals at the Musée du Louvre, the Verbier Festival, the Mecklenburg-Vorpommern Festival, and concerto appearances in Graz, Austria, Hong Kong, and Singapore. She has performed in Korea several times, including repeat engagements with the Seoul Philharmonic, the KBS Symphony under the direction of Dmitri Kitaenko, and a four-city tour of the country with the Russian State Symphony Orchestra and Valery Polyansky.

Last June, Rachel embarked on a three-city tour of China, where she combined outreach and performances at the Beijing Modern Music Festival, Tianjin May Festival, and Shenyang Conservatory. The tour marked the launch of a year-long association with the Asia/America New Music Institute, a non-profit organization dedicated to promoting new music relationships and cultural exchange between Asia and the Americas. Further appearances with AANMI include concerts at the Asia-Europe New Music Festival in Hanoi, Vietnam, the Utah Arts Festival in Salt Lake City, and the USC Pacific Asia Museum in Pasadena, CA.

Rachel takes a multidisciplinary approach to music that often lends itself to collaborative, interdisciplinary performances and new music commissions. Last season saw the world premiere, under the auspices of the MATA Festival, of Pulitzer Prize Finalist Christopher Cerrone’s Violin Sonata – a work which Rachel commissioned, alongside pianist David Kaplan, through a Harvard Fromm Music Foundation grant, and which she performs frequently in recital. As a Resident Artist with Metropolis Ensemble in NYC, she has also commissioned a forthcoming work by Scott Wollschleger for violin and chamber orchestra. In 2014, she performed the world premiere of Matthew Aucoin’s The Orphic Moment in an innovative staging that mixed poetry, drama, visuals, and music. Other recent highlights include extensive interdisciplinary collaborations with Ballet San Jose, Symphony Silicon Valley, and conductor George Daugherty, as well as a week-long run of the theatrical concert, Tchaikovsky: None But The Lonely Heart, with Ensemble for the Romantic Century at BAM.

Rachel has been profiled in The New Yorker, The Los Angeles Times, Family Circle Magazine, and The Strad Magazine. Her performances have been broadcast on major media outlets in the U.S., Germany, Korea, South Africa, and Brazil, including a televised concert in Rio de Janeiro, numerous radio appearances on 98.7 WFMT Chicago radio, and American Public Media’s Performance Today. Her television credits include appearances on the Disney Channel, “Fiddling for the Future” and “American Masters” on PBS, and the 2000 Grammy Awards ceremony in Los Angeles.

Rachel made her orchestral debut at the Aspen Music Festival in 1997 at the age of nine, and the following year performed at the 50th anniversary celebration of the Universal Declaration of Human Rights at the United Nations. A native of Chicago, Rachel began her violin studies at the age of four, and in 1996, moved to New York to study with the late pedagogue Dorothy DeLay. She continued her studies at the Juilliard School Pre-College Division with Itzhak Perlman. She holds a B.A. degree in English from Harvard University and an M.M. from the New England Conservatory, where she studied with Miriam Fried through its joint dual-degree program with Harvard College.

She performs on a Nicolo Gagliano violin (Naples, 1760), double-purfled with fleurs-de-lis, named Alejandro.

Tickets are available from Webtickets  https://bit.ly/2MfXMO4 or from the Baxter Theatre Centre Box Office on the night of the concert.  For more information call 084 682 1337 or email info@ctconcerts.co.za