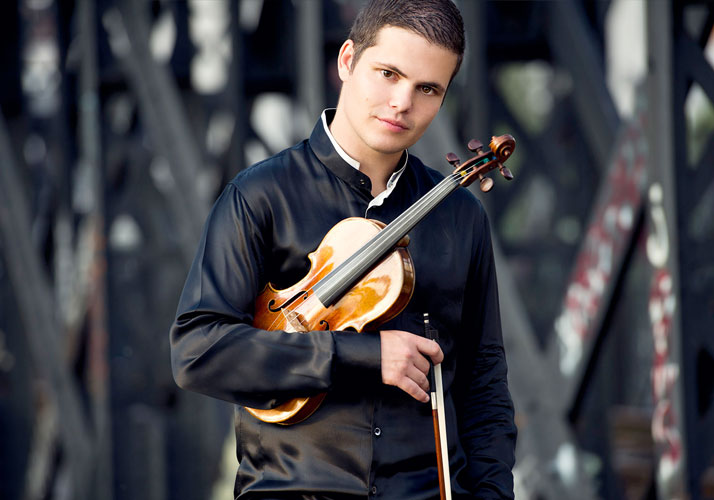 “Gilman is a name to watch”, wrote Classic FM Magazine in 2007, and the Frankfurter Allgemeine Zeitung described him as “an artist who identifies profoundly with the work”. Today Alexander Gilman is among the most renowned violinists and teachers, and since 2013 has been artistic director of the LGT Young Soloists.

For his CD recording with the Cape Town Philharmonic Orchestra conducted by Perry So with violin concerti by Barber and Korngold, Waxman’s Carmen Fantasy and the theme from the film Schindler’s List by Williams, Alexander Gilman was acclaimed in outstanding reviews. For this recording he received the prestigious Diapason d’Or prize and many other awards.

Alexander’s debut CD on Oehms Classics (2007) with works by J. Brahms, S. Prokofiev, Wieniawski, and S. Foster, recorded with pianist Marina Seltenreich, was awarded enthusiastic reviews by the press. “The Strad” described the CD as superb, other German major magazines like “FonoForum” or “Ensemble” called Alexanders CD a successful or a fantastic debut.

His concert activities have been documented by a large number of radio, television and concert recordings, including Bavarian Radio, WQXR New York, Rai Italia and NHK Japan

Alexander Gilman’s repertoire encompasses both Baroque and Classical works, as well as romantic and contemporary compositions. The violinist is particularly active in New Music, and has thus participated in numerous premieres of commissions by contemporary composers such as Benedikt Schiefer, Uwe Lohrmann, Matthjis van Dijk and Konstantia Gourzi.

In recent years, alongside his activities as a soloist, he has been able to establish a position as an internationally recognized teacher. The fact that his students regularly win competitions demonstrates the high quality of his teaching work. In addition to his teaching activities at Swiss music colleges such as the Zurich University of the Arts (ZHdK) and currently the Kalaidos, Alexander Gilman also holds master classes at universities and festivals worldwide, and is in demand as a juror at a variety of international music competitions.

He held master classes at the Summit Music Festival New York, Baptist University Hong Kong, Academy of Fine Arts Singapore, Dubrovnik Festival, University of Cape Town and many more. Before joining the Kalaidos Music College, Alexander Gilman taught as a lecturer at the Amadeus Music Academy in Vienna, where he was also responsible for the entire String Department.

With the founding of the LGT Young Soloist, he has succeeded in creating a unique initiative to promote young talents and to offer them a musical homeland. A unique strings ensemble of highly talented young soloists between the ages of 12 and 23 was created. Within a very short time concerts followed at Gasteig Munich, Mozarteum Salzburg, Victoria Hall Singapore, Rheingau Music Festival, Schloss Elmau, on MS Europa 2, as well as annual tours through Asia and Europe.

Tickets are available from Webtickets: http://bit.ly/Wallfisch or from the Baxter Theatre Centre Box Office on the night of the concert.  For more information call 084 682 1337 or email info@ctconcerts.co.za