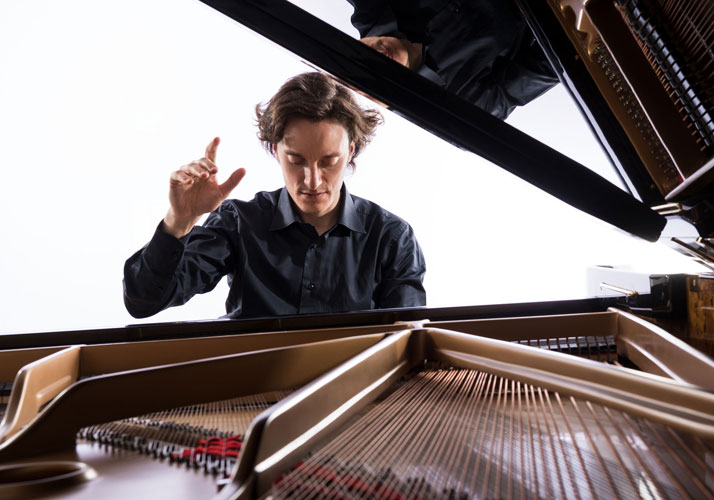 Hailed by the British music critics as the “natural successor to his great compatriot Arturo Benedetti Michelangeli”, Alessandro Taverna’s “music making stimulates the senses as does a visit to his native Venice”, and gives “rise to a feeling of wonderment”.When he reached the final and performed Chopin’s First Piano Concerto at the 2009 Leeds International Piano Competition, “the world was suddenly suffused with grave beauty: flawless minutes of poetry”, said the newspaper The Independent.

He was chosen by the international foundation “The Keyboard Trust” (London), for which he performed in solo recitals and concertos in Europe and the United States. In 2009 he opened the season of Lorin Maazel’s Castleton Festival (Virginia): this is when Maestro Maazel said of him “We must make music together!”and consequently invited him to play and conducted him in a tournèe through Germany and Austria.

A native of Venice, he has studied with Laura Candiago Ferrari at Santa Cecilia Music Foundation in Portogruaro and with Franco Scala, Leonid Margarius, Boris Petrushansky and Louis Lortie at Imola International Piano Academy. He later specialized at Santa Cecilia National Music Academy in Rome with Sergio Perticaroli, at the Hochschule für Musik in Hannover with Arie Vardi, and at the Lake Como Piano Academy.

Taverna teaches at the Conservatory of Music “Jacopo Tomadini” in Udine and at Santa Cecilia Music Academy in Portogruaro.

For his artistic achievements and his international career, in 2012 he was awarded the Premio Presidente della Repubblica by Italian State President Giorgio Napolitano.

A documentary on his life was shown on BBC4. He has also recorded for BBC Radio 3, Rai Radio 3, Slovenian National Radio and Television, RSI Swiss Radiotelevision.

Following the critical success of his Medtner Sonatas disc for SOMM Recordings, Taverna has recorded an all-French recital disc for the same label, with a release date of June 2017.

Tickets are available from Webtickets https://bit.ly/2MfXMO4 or from the Baxter Theatre Centre Box Office on the night of the concert.  For more information call 084 682 1337 or email info@ctconcerts.co.za